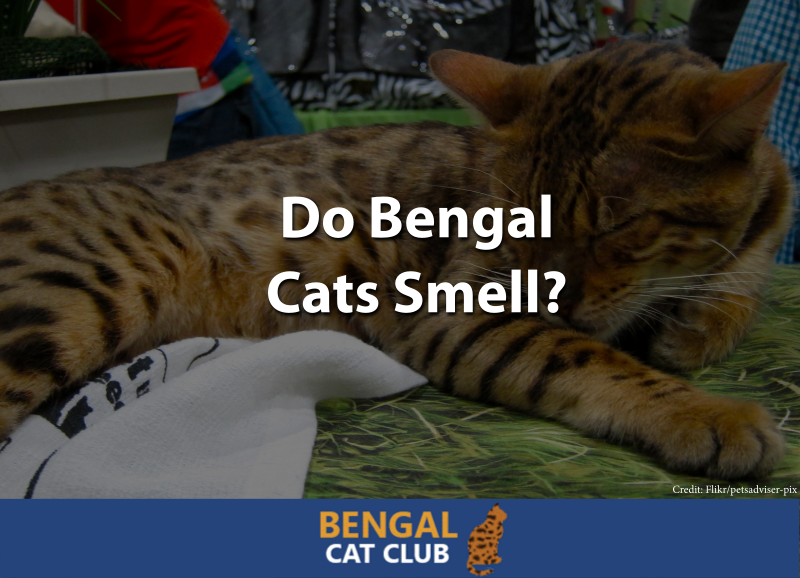 It’s no secret that Bengal cats are different than typical house cats in a lot of ways. This leads to a lot of questions being asked about Bengals including do Bengal cats smell?

The truth is a bit complicated, so stick with us as we explore this subject and talk about what might be causing your Bengal cat to have a foul odor.

Before we jump into it, here’s a quick video of a Bengal cat who apparently thinks she smells bad:

If your Bengal cat suddenly starts smelling bad or even just different than normal, it usually indicates that there’s a problem. This is because Bengal cats are very clean animals and shouldn’t have a bad odor to them. In most cases, if they do smell bad, there’s a reason for it, and it will usually require a trip to the vet to make sure your kitty is ok.

Halitosis is the medical term for bad breath. It’s one of the most common causes of a bad odor in Bengal cats, especially older ones. If you don’t regularly brush your Bengal’s teeth or take them to the vet for yearly teeth cleanings, then this could be the reason that your Bengal cat smells bad.

The bad smell is a result of an infection in their mouth caused by a buildup of bacteria, and could mean that they have a cyst or another more serious problem. In really bad cases, the smell from their mouth can be transferred to their fur as they clean themselves, giving you an overall smelly Bengal cat.

If your cat’s breath smells, you should get them to the vet as soon as possible for a teeth cleaning. If left untreated, their teeth could end up rotting to the point where they have to be removed. Another concern is that the bacteria in the mouth can get into the blood stream and make your cat very ill.

To help keep your cat’s teeth clean, you can give them Greenies Dental Treats for Cats that will help keep plaque from building up on their teeth, or brush their teeth every day with a special cat toothbrush and cat toothpaste.

Another reason that Bengal cats may smell is if they have parasites. Intestinal parasites mess with the way a cat digests food and can therefore cause smells in a couple of different ways. Sometimes, it makes a cat pass gas more often, and often they cause diarrhea which typically has a bad smell to it.

If you have not had your cat tested for parasites in a while and are not regularly treating them for them, then you should take them into the vet to have them tested. Most vets will allow you to simply drop off a stool sample and then give you the medication for it if necessary, making it extremely easy to treat this possible cause of a smelly cat.

If your Bengal doesn’t have parasites but you’re still sure that the odor problem is coming from their back end, then it’s possible that they have another type of digestive problem. Cats are obligate carnivores which means they get all of their nutrients from meat and have a very difficult time digesting anything that comes from plants.

Despite that limitation, many cheap types of cat food are made with fillers that have corn and other grains that cats simply cannot digest. The best commercial cat foods you can feed your cat are those which are grain-free and that include meat as the first 2 – 3 ingredients which shows that it’s primarily made with meat rather than fillers.

A few examples of high-quality cat foods that you can give your Bengal cat are BLUE Wilderness, Taste of the Wild, and Wellness. You may be surprised at how quickly your cat improves after switching to a high-quality, grain-free cat food that they can actually digest. Even their coat will improve!

Although skin infections are not as common in cats as they are in dogs, cats can still get them. Ear infections, however, are common in Bengal cats. When they get severe enough, they will cause a bad odor that can sometimes be smelled from a distance while other times is only noticed when getting up close and personal with a cat’s ears.

Some other common signs of ear infections include repeated shaking or scratching at the ears, a head tilt, and black dots or other substances in the ears. If you suspect your Bengal cat has an ear infection, get them to your vet to have them checked out as soon as possible since untreated ear infections can lead to balance problems and deafness.

Sometimes, a Bengal cat smells because they’ve stopped cleaning themselves which has led to a buildup of natural oils and bacteria which causes a bad smell. This smell is much more common in dogs that don’t clean themselves.

Most of the time, if a Bengal cat is not cleaning themselves, this means that there is something wrong with them. Cats that are too overweight to clean themselves properly may stop self-cleaning as will cats that have arthritis which makes it painful for them to clean themselves.

In some cases, there may be a serious underlying medical condition that is causing a cat to stop cleaning themselves, such as diabetes or hyperthyroidism. If you can tell that your Bengal cat has stopped cleaning him or herself, then you should get them to the vet as soon as possible so you can rule out any possible illnesses or start treatment right away.

Male cats that have not been neutered often have a stronger smell compared to other cats, which is used to attract females. They are also known for spraying urine everywhere to mark their territories which can certainly cause a lot of odor problems.

If you are not planning on breeding your Bengal cat, then it’s best to have them neutered to keep them from smelling, spraying, and/or wandering off. There are also a number of health problems that can be avoided by neutering a cat.

On the other side, a female that has not been spayed will go into heat several times during the year. As she tries to attract a male to mate with, she will often begin peeing around the house so he can smell her. Some females will even “spray” their urine on the wall much like a male cat, making for a very smelly environment.

As with males, it’s best to have your female cat spayed unless you are using her for breeding purposes. It will not only keep her from going into heat and peeing everywhere, but it will also help prevent her from getting several types of cancer, getting pregnant, and running away which could be dangerous.

Do Bengal Cats Smell Different from Other Cats?

A common debate among Bengal cat owners is whether or not Bengal cats have a different odor than other cats. There’s no clear evidence of this and many people claim they do while others claim they don’t. Those that do say their Bengal cat smells different from other cats describe their odor as “ferret-like” and not entirely unpleasant, but certainly different.

Because there’s no definite answer about this from veterinarians, it’s hard to say for sure if Bengal cats do indeed smell different from other cats. If it is true, it could be related to their wild ancestry, as many wild cats will have stronger smells that they use to communicate with other cats. It may also be that some Bengal cats do smell whereas others simply do not.

How to Make Your Bengal Cat Smell Better

If you do have a Bengal cat that seems to smell different from your other cat and there’s no medical reason for your cat smelling badly, there is something that you can do about it. You can give your Bengal cat an occasional bath.

It’s important not to bathe Bengal cats too often since water and shampoo can dry out their skin, but this is an option for owners who feel their Bengal doesn’t smell great and want to get them smelling better. You may also need to bathe your Bengal cat if they’ve gotten into something smelly or dangerous that you don’t want them licking off of themselves.

Bathing a Bengal cat is typically easier than bathing a house cat since most Bengals love water. Make sure the water is warm without being too hot, and that you use a shampoo made specifically for cats like Earthbath All-Natural Cat Shampoo. Then, dry them as thoroughly as possible with a towel and make sure they have a warm, quiet place where they can finish drying themselves off.

So, Do Bengal Cats Smell?

Although there is some evidence that Bengal cats may smell differently than other cats, it’s usually not a strong or even noticeable smell that would bother most owners. And, if your cat does have a bad odor, it’s much more likely to be a serious problem that you’ll need to visit the vet for.

If all else fails or your cat has gotten into something they shouldn’t have, then you can give them a bath with a special cat shampoo like Earthbath that won’t dry out their delicate skin.

What about you? Have you noticed that your Bengal cat has a different smell than your other cats? Let us know in the comments below!