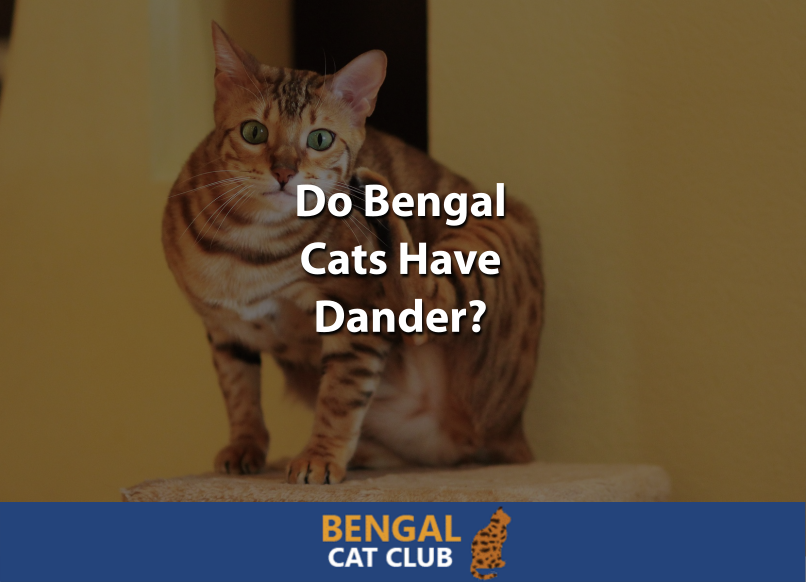 Do Bengal Cats Have Dander?

The short answer is yes, Bengal cats do have dander, since it’s something that all animals (and humans, for that matter!) have. But we’re going to go into more details than that in this post so you can learn everything you need to know about Bengal cats and dander.

In this post, we’re going to cover the following:

Dander is something that can be found on the skin and in the fur of all animals. It’s microscopic, which means it’s invisible to the naked eye. Dander is primarily made up of two different things: dead skin cells and dried saliva.

As the cat moves around or when they’re being brushed or stroked, this dander gets into the air and can be inhaled by people. It can also build up in carpets and air vents over time and may get mixed together with dust or dirt. Unfortunately, dealing with dander is part of owning a Bengal cat.

Does Dander Cause Allergies?

One of the biggest problems that dander causes is allergies. This is because when people are allergic to cats, it is nearly always a compound in their saliva that causes the allergic reaction. This compound is known as Fel D1, and all cats have it, including Bengal cats.

Dander causes an allergic reaction when someone breathes in these Fel D1 particles. Their body sees them as dangerous invaders and triggers an allergic response. The body releases histamine which causes the body tissues to become inflamed in an attempt to protect itself against what it considers to be dangerous.

When someone is having an allergic reaction to a cat, the most common symptoms include a runny nose, sneezing, congestion, red or itchy eyes, and/or a skin rash or hives. For people who are severely allergic, they will often have all of these symptoms and may even have an asthma attack.

These allergic reactions may be worse in the spring and fall as Bengals are shedding more during that time when they’re growing in their summer or winter coats. This is because their fur is coated in their saliva which contains the Fel D1 compound, and as more of this is in the air and covering everything, there’s more chances that it will be inhaled and cause allergic reactions.

Do Bengal Cats Have Dander?

Like all cats, Bengal cats do indeed have dander. However, as we’ll get to later, they may not have as much dander as other cats which could mean that they are hypoallergenic.

Because dander comes from Bengals cleaning themselves, it’s impossible to completely avoid them having dander. And because Bengal cats are extremely active, it’s easy for this dander to get into the air as the cat runs around and climbs on everything in the house.

Many people who are allergic to cats still love cats and want to own one, which is why they will look for cats that are considered to be hypoallergenic. These are cats that have less of the Fel D1 which means that they do not cause an allergic reaction in people that are allergic or else they cause a less severe reaction.

In most cases, these are cats that have no fur or very little fur, so they don’t need to groom themselves as much. Additionally, having less fur on their bodies means less dander and less fur getting into the air, onto furniture, and in carpeting.

As noted in the video, everybody has different sensitivities which means it’s impossible to know for sure if a certain breed of cat is going to work for someone that has allergies. For that reason, someone who is allergic to cats should find a way to test their reaction to a certain breed and cat before jumping in and buying one.

Because there haven’t been official studies done on Bengal cats to confirm the reason that they are hypoallergenic, there are several theories. One is that they produce less of the Fel D1 compound than other cats, which would mean a less severe reaction for people that are allergic to cats.

Another popular theory is that because Bengals have a shorter coat, they don’t spend as much time grooming themselves as other cats. This means that there is less of the allergen on their fur and less that can get into the air and be inhaled by people.

How to Reduce Dander in Bengals

Pet dander isn’t fun to deal with, even if you aren’t allergic to it. However, there are a few things that you can do to reduce dander in Bengals. This is especially good to do if someone in your home is allergic to your cat, or if you have someone visiting that’s severely allergic to cats. Minimizing the amount of pet dander in your home will help keep allergic reactions to a minimum.

Here are a few strategies you can use to reduce dander in Bengals:

There’s a surprising amount of dander that accumulates in the litter box, so make sure you regularly empty the entire box and rinse it out with water. There’s likely going to be a lot of dust inside, so wear a mask to avoid breathing in the dust and dander.

The easiest way to do this is to get litter box liners so you can simply remove everything in the box and have it in a plastic bag already. Some, like these Kitty Litty Liners, have drawstrings on them and are tear-resistant!

Keep Them Off the Furniture

A big cat tree, for example, is perfect for Bengals because it gives them plenty of space on which they can play and lots of places to sleep so they can call it their own.

You may also want something smaller, like a cat bed. This cave-shaped bed is great because they can crawl inside and feel safe and hidden.

If you can’t keep them off the furniture, consider getting allergen covers for your mattress, pillows, and couch cushions. This will prevent dander from your Bengal cat from getting inside of the mattress, etc. which means that you can simply remove blankets or pillowcases that the cat has been on before using them.

Wherever your cat spends the majority of its time, there will be a lot of dander. So, it’s important to make sure their bedding is machine washable, like the cave-shaped bed we mentioned before. Anywhere else your cat hangs out should also be washed frequently to keep dander to a minimum.

Use a HEPA Vacuum

A HEPA vacuum is one with a special filter that removes allergens from whatever it’s cleaning. Most vacuums will pick up dirt and allergens, but are only designed to trap the dirt, and then spew the allergens back into the air.

So, you’ll want to invest in a special vacuum that will trap pet dander and other allergens, like this one. Since you can’t toss cat trees or couches in the washing machine, this vacuum will allow you to keep those areas clean and dander-free.

Another option is to get a HEPA air filter for your home, which will work to constantly snatch stray pet dander from the air so it’s not making its way into your lungs. This one can cover up to 86 square feet which makes it perfect for a bedroom or office space.

Although Bengal cats certainly don’t need to be regularly bathed with water and shampoo, it can help to reduce dander. Since most Bengal cats love water, bathing them could actually be a fun activity for the two of you to bond during.

Keep in mind that frequent bathing can dry out their skin, so don’t do it more than once per week. You also need to use special shampoo made for cats that won’t dry out their sensitive skin.

Here’s a video of a Bengal kitten getting her first bath along with some tips and instructions on how to do it:

What about you? Do you have a Bengal because they are hypoallergenic and produce less dander? Tell us about your experiences below! We’d love to hear from you!