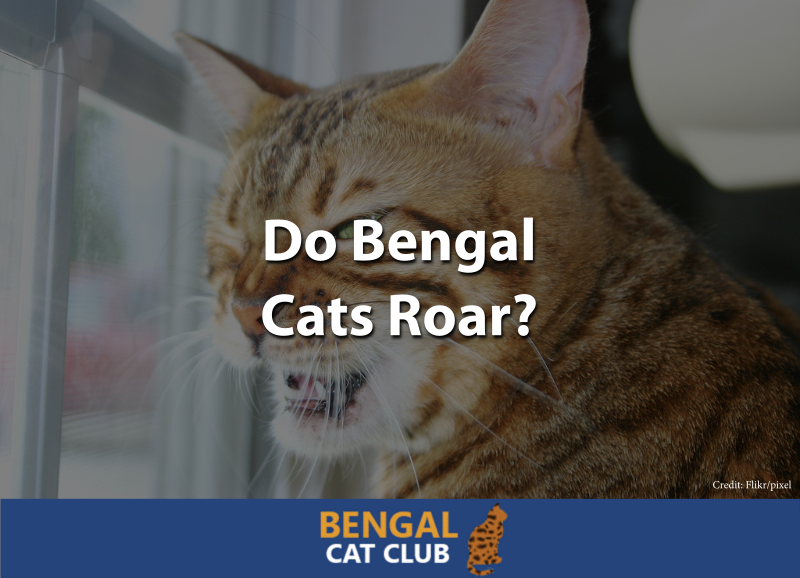 Because of their wild heritage, many people have questions about how different Bengal cats are from normal housecats, including do Bengal cats roar?

We’re going to answer that question and provide you with information about how cats roar and Bengal cat vocalizations.

Cat Vocalizations – What You Need to Know

When it comes to cats, they can either purr or roar. Big cats like lions and tigers have the ability to roar because of the way their throats are built.

In order to produce a roar, the larynx, or the windpipe, needs to be able to move. In big cats, what allows this to happen is a length of cartilage that connects the delicate hyoid bones at the back of the cat’s tongue with their skull. This cartilage moves the larynx just right to produce a roar.

Cats that can purr, on the other hand, don’t have that length of cartilage. Instead, the twig-like hyoid bones are able to move more freely. Then, when a cat wants to purr, it vibrates the larynx which gets the hyoid bones vibrating, making that unique purring sound.

What you may not know, is that cats are classified by whether or not they are able to roar. While most of the big cats such as jaguars and leopards are in this roaring category, other large cats like the puma and cheetah are not in this group because they aren’t able to roar. Cats that can purr are classified as small cats, which includes housecats, bobcats, ocelots, and the Asian Leopard Cat.

Since Bengal cats can purr, then it means that they can’t roar. They are classified as small cats since they are a mix of Asian Leopard Cats and housecats. Since Bengal cats are very vocal, they make plenty of other noises that will let you know exactly how they’re feeling.

If a Bengal cat could roar, this is what it would look and sound like:

Since roaring and growling are similar sounds, it begs the question as to whether or not a Bengal cat can growl, since they can’t roar. The truth is that Bengal cats can growl, much like other domestic cats.

Here’s one growling because he does not want his owner to take his toy away:

Bengal cats may growl for a variety of reasons. It is always a warning, however, that the Bengal cat wants you to back off.

Often, the cat is feeling threatened for some reason and is getting ready to attack in order to defend itself. First, though, the Bengal will growl to tell whatever or whomever is threatening it to move away.

Another reason that Bengal cats may growl is that are protecting something. The cat in the video, for example, is protecting his toy. In the wild, it’s more likely that a Bengal would be growling to protect an animal that they just hunted and caught. Or, a female cat may growl to protect her kittens if a predator has come too close to where she has hidden them.

In addition to growling, Bengal cats make a number of other vocalizations to communicate with other cats and their owners.

Bengal cats make a wide variety of sounds. In the wild, most cats primarily communicate vocally between a mother cat and her kittens. They may also vocalize during mating season or when fighting, but generally cats use body language to communicate with each other.

Here are several common examples of Bengal cat vocalizations that you can use to determine exactly what your Bengal cat is trying to tell you:

This is usually pretty obvious: your Bengal is happy. Most of the time, a cat purrs to express that they are feeling happy. They may also purr in anticipation of getting food or as a way to ask you nicely for food.

Sometimes, a cat will purr when they are in pain, so if your Bengal starts purring far more often than normal and they don’t appear to be happy, then you may need to take them to the vet to see if there is a medical problem that they are hiding.

There are a wide variety of meows which makes it hard to cover what all of them mean. Most of the time, a Bengal cat will meow to get your attention or simply to interact with you. It may be that their food dish is empty, or perhaps they want to go for a walk.

If your cat seems like they want something and you’re not sure what, try following them or visiting different parts of the house until it becomes clear as to what they are asking you for.

Here’s a Bengal cat begging for some tap water and displaying quite the variety of vocal sounds:

This takes on a different tone than a meow, and is usually much louder. Most cats will only yowl when they are distressed about something. It could be that they are extremely hungry, lonely, or in pain.

Female cats that are in heat and males looking for a female will also engage in a type of yowling known as caterwauling as they try to find each other.

If your Bengal cat is yowling, do what you can to eliminate their stress because it’s not good for them to be that stressed for that long. Unfortunately, if they are yowling because you’re on the way to the vet and they don’t like car trips, then there’s nothing you can do, but if they’re simply hungry, feed them!

This is a unique sound that all small cats make when they get excited. They may chirp to greet someone, or they may chirp at something they really want to catch but can’t, like a bird in the yard. This cute sound is always a fun one to hear from your Bengal, especially if it’s directed at you!

So, do Bengal cats roar?

While Bengal cats don’t roar like their big cousins, they do make a number of other fun sounds that you can enjoy as you interact with your pet.

What about you? What cat sound is your favorite? Tell us in the comments below as we’d love to hear from you!