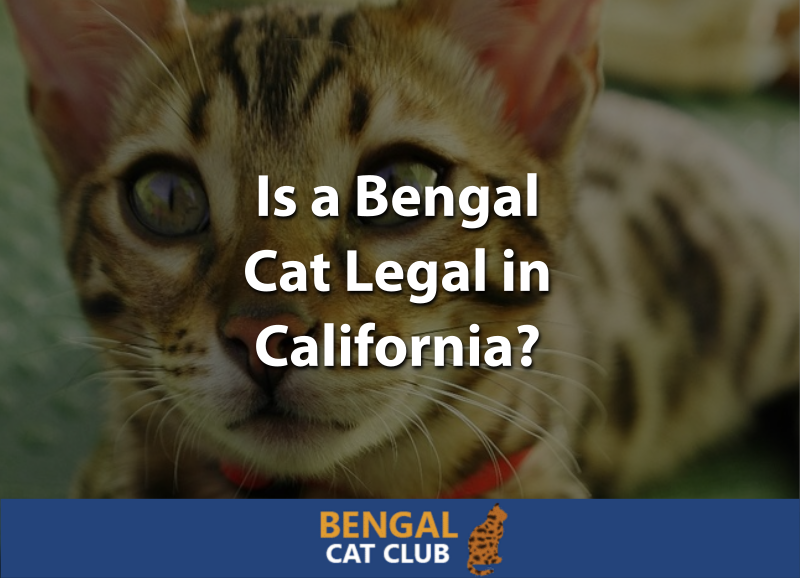 Is a Bengal Cat Legal in California?

Since every state has different laws regarding Bengal cats, it’s important to ask questions before getting one, like is a Bengal cat legal in California?

While there are some states that ban Bengal cats because of their wild heritage, California is not among them. However, California does have some specific laws about Bengal cats that needs to be considered.

In this post, we’re going to cover the following:

What is a Bengal Cat?

A Bengal cat is broadly defined as any cat that is descended from a pairing of a domestic cat and an Asian Leopard Cat. Some of these generations are considered exotic cats while others are domestic.

Many state laws will only allow the domestic generations while banning those that are considered exotic. This is because the exotic cats are still closely related to their wild cousins and so there are concerns that they could be dangerous if kept as pets.

Bengal cats can be identified by their unique coat, which is spotted, marbled, or covered in something known as rosettes. They can have a base coat that’s brown, black, cream-colored, or silvery-grey, and spots that are black or brown.

What really sets these cats apart is that their coats are very distinctly contrasted, so their markings stand out boldly against the background color. It’s this distinction that draws many people to want to own one of these majestic cats.

Something else that can help you identify Bengal cats is their body type. They have long back legs, uniquely wild-looking heads, and an overall muscular body clearly reflects their wild heritage.

They also weigh in at 8 to 10 pounds for females and 10 to 15 pounds for males, making them one of the larger breeds of cat.

Overall, Bengal cats are friendly, loyal, intelligent animals that make great pets, but because of their wild roots, some states make it illegal to own one or have restrictions on them.

Legally, cats that are F1, F2, F3, and F4 generations are considered exotic cats because of how closely-related they are to the wild Asian Leopard Cat.

Because lawmakers are concerned about these cats having wild instincts that could put people in danger, they may ban these generations of Bengal cat in the same way they would other wild cats such as tigers, lions, and bobcats.

Once a Bengal cat is an F5 generation, it is considered to be far enough removed from their wild ancestors that they can be legally kept in every state. For this reason, if you live in a state that has restrictions on Bengal cats such as Georgia or New York, then you need to make sure that you’re getting a Bengal that is at least from an F5 generation.

Is a Bengal Cat Legal in California?

In California, there are no restrictions on owning a Bengal cat. This includes those from earlier generations, which makes it a great place to be if you want to own a Bengal cat.

However, if you do get an F1 – F4 Bengal cat, you need to be aware that it is considered an exotic and falls under California law regarding exotic cats.

Even though a Bengal cat is legal in California, that doesn’t necessarily mean you should go out and get one. Bengal cats are more energetic than most cat breeds, and require more attention, so they’re not for everyone.

Before you get a Bengal cat, make sure that you have adequate space for them, and are prepared to spend plenty of your time interacting and playing with them. And of course you’ll need to make sure you’re prepared to pay for vet bills, high-quality cat food, cat furniture, and plenty of cat toys to amuse them.

For generations of Bengal cats that are considered exotics, there is a Californian law that strictly prohibits declawing them except when medically necessary for the health of the cat.

This is good news for Bengals, however, since most cats that are declawed suffer immensely throughout their lives. Declawing a cat involves amputating part of their paws which can cause a number of issues such as litter box aversion, aggression and fear-biting, and arthritis.

If you have a Bengal cat (or any cat for that matter!), we recommend not declawing them as it can cause a number of problems for them.

Instead, simply work with them to teach them not to use their claws against people and provide them with a high-quality scratching post that they can use to sharpen their claws on.