When Do Bengal Cats Go into Heat? - Bengal Cat Club 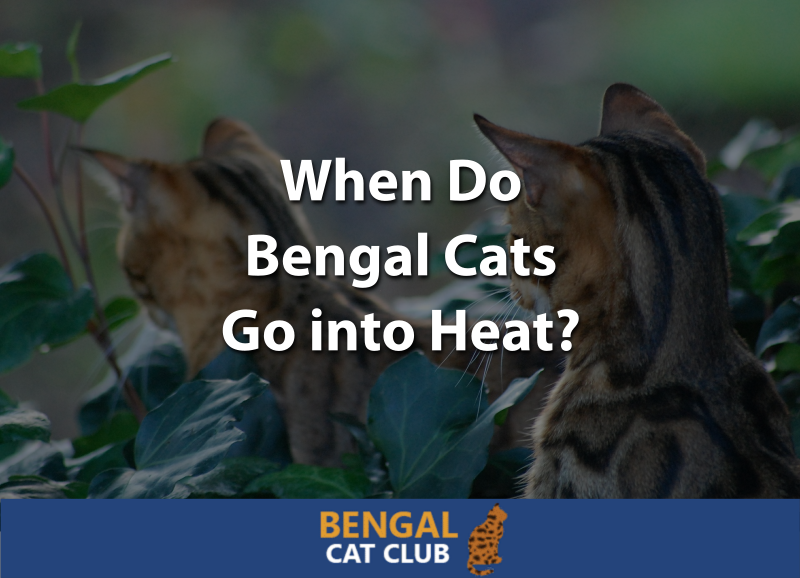 When Do Bengal Cats Go into Heat?

Whether or not you’re planning on breeding her, if you have a female Bengal cat, you may be wondering when do Bengal cats go into heat.

This question is especially important to breeders who need to know how soon they can breed their Bengal cats and when to breed them. It’s also important for people to know who aren’t planning on breeding their Bengal so they know when to be extra careful.

When Do Bengal Cats Go into Heat the First Time?

A Bengal cat will go into heat for the first time in her life once she reaches sexual maturity. Most of the time, this is before she is actually considered a full-grown adult cat.

While most cats will have their first heat cycle around 6 months, it’s also common for Bengal cats to reach sexual maturity as early as 4 months or as late as 10 months. For that reason, it’s more important to keep an eye on their behavior during those months to watch for their first heat cycle.

If you are not planning on breeding your Bengal cat, then it’s best for her to be fixed before her first heat cycle. That’s mainly because you want to completely avoid any chance of her getting pregnant, but also because the increase of hormones is not good for her.

Even if you are going to become a Bengal cat breeder, then you should wait for her to have at least 2 heat cycles before breeding, or make sure she’s at least one year old. This is to ensure that her body is fully mature, which will make it much safer and easier on her.

When Do Bengal Cats Go into Heat Every Year?

This is a difficult question to answer because cats can technically go into heat at any time throughout the year. However, most do so in the spring and summer months as the days get longer.

Because so many cats do go into heat during the spring and summer, late summer and fall are known as “kitten season” by animal shelter workers. During these times of the year, there is a sharp increase in the number of kittens that shelters and animal rescues end up with.

The number of unwanted cats and kittens that are in shelters is why it’s vital to prepare homes for potential kittens before you even breed your Bengal cat if you are choosing to do so. This will prevent them from being part of the problem and from ending up in a shelter.

Signs of Heat in Bengals

Watching for signs of heat in Bengals is important for both breeders and non-breeders alike. When you can tell your cat is in heat, then you can take appropriate action.

Here are the signs of heat that you should be looking for:

Keep in mind that while most cats will display most of these signs, some will only display a few of them, and a few won’t display any signs of heat at all. Still other cats will show other signs that they are in heat, such as becoming more aggressive instead of more affectionate.

Here you can see a female Bengal cat in heat, demonstrating several of the obvious signs on the list:

If a Bengal cat becomes pregnant while in heat, she will go out of heat and will not go back into it again until her kittens are between 6 and 8 weeks old.

It’s best for the mother cat to not be bred that soon after giving birth because pregnancy and then nursing are hard on her body, so look for signs of heat during those weeks to keep her away from male cats and give her body extra time to recover.

Cats who do not become pregnant during their heat cycle will typically go back into heat 1 to 3 weeks after they go out of heat. This will continue for several months and then will stop until she goes back into heat the following year.

Like all cats, Bengals are seasonally polyestrous breeders, which means they will have multiple heat cycles during their breeding season.

What to Do When Bengal Cats Go into Heat

What you do when your Bengal cat goes into heat will depend on your goals with her.

If your goal is to breed her and she’s already fully mature, then you can go ahead and introduce a male cat to her. You should have already picked out the male long before she went into heat to ensure that the stud you found is a high-quality cat that has all the right characteristics that you want to pass on to future generations.

If you don’t want to breed your Bengal and she goes into heat, you’ll need to make sure she stays as far away from male cats as possible. Some cats become escape artists while in heat, so you may even need to lock them in a bedroom or bathroom during their heat cycle to be extra safe when it comes to them encountering a male cat.

Bengal cats may be in heat for anywhere from 3 days to 3 weeks, though the average heat cycle is 4 to 7 days. Most breeders recommend keeping the male cat with the female for 1 to 4 days to ensure that they have several breedings which will help her ovulate and get pregnant. You’ll then use that day to determine when she is due.

It’s important for breeders to keep their female and male cats in the best possible health, which means making sure they are getting high-quality, grain-free cat food like Taste of the Wild. Special supplements like Breeder’s Edge will help your female to get all the nutrients she needs to have a healthy pregnancy. These can also be given before breeding to prepare her body for pregnancy.

What about you? Have you had a Bengal cat that’s gone into heat? Share your experiences below!